The Foreign Press Center’s Virtual Briefing Series on the 2022 U.S. Midterm Elections provides background, context, and access to non-government experts in the run-up to the 2022 midterms in November.  We are pleased to offer this virtual series to enable selected journalists to remotely cover the 2022 U.S. elections by providing access to authoritative sources for an inclusive discussion of the electoral process in the United States. Transcripts are available below for all elections-related briefings in the series.

On October 7, 2022, the FPC hosted a briefing outlining the latest results from the Quinnipiac University Poll in advance of the 2022 midterm elections, including their last national poll, as well as more recent polls in Georgia, Connecticut, and Texas. The Quinnipiac University Poll is an independent, non-partisan national and statewide public opinion poll that informs the nation where voters stand on critical issues. The Poll is often cited by major news outlets. Briefer: Doug Schwartz, Director of the Quinnipiac University Poll, has spent 25 years at that university. He is responsible for the poll’s methodology and all aspects of the survey process, directing each project from conception through analysis. Schwartz began his career as a survey associate with the CBS News election and survey unit and as an election night analyst for 60 Minutes.

Throughout U.S. history, civil rights leaders have fought to ensure that the freedom to vote is a fundamental right for everyone. The COVID-19 pandemic brought changes to some voting processes in 2020, as well as new voting laws. This October 7, 2022, briefing explores voting rights and the ways in which people will cast their ballots in the 2022 midterms. Briefer: Dr. Lisa Bryant, is the current Chair of the Department of Political Science at California State University, Fresno. She has worked with several non-partisan organizations to better understand voter behavior and increase voter registration and turnout. Her work has been published in several journals including American Politics Research, Political Behavior, Electoral Studies, and Publius: The Journal of Federalism. Her article, “Working Mothers Represent: How Children Affect the Legislative Agenda of Women in Congress”, was awarded the Hahn-Sigelman Prize for best article published in American Politics Research in 2019. Dr. Bryant currently serves on the national research advisory board for the Electronic Registration Information Center. 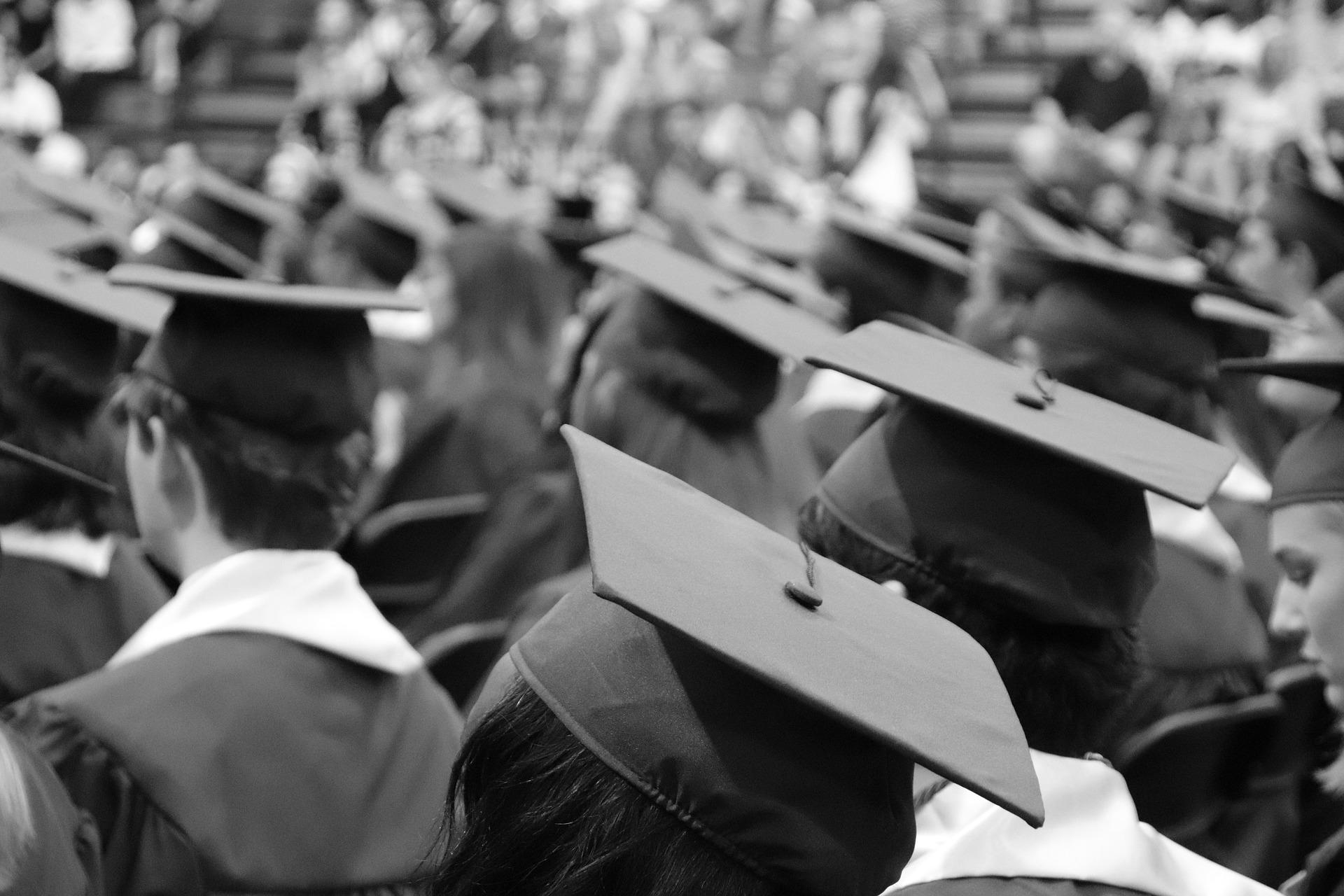 Education touches almost every household in the United States, whether as taxpayers or as parents, but education rarely makes it to the top of voter’s stated priorities. COVID-related school closures and conversations about how diversity is addressed in schools have brought education into new prominence as a voter priority in recent elections. Jeffrey R. Henig is Professor of Political Science and Education at Teachers College and Professor of Political Science at Columbia University. His is an expert on urban politics, racial politics, and school reform, and author or co-author of twelve books, including The Color of School Reform: Race, Politics and the Challenge of Urban Education and Building Civic Capacity: The Politics of Reforming Urban Schools, and Outside Money in School Board Elections: The Nationalization of Education Politics (2019). His writings on contemporary policy issues have appeared in Education Week, The Chronicle of Higher Education, Boston Globe; Los Angeles Times, Washington Post, and The New York Times. 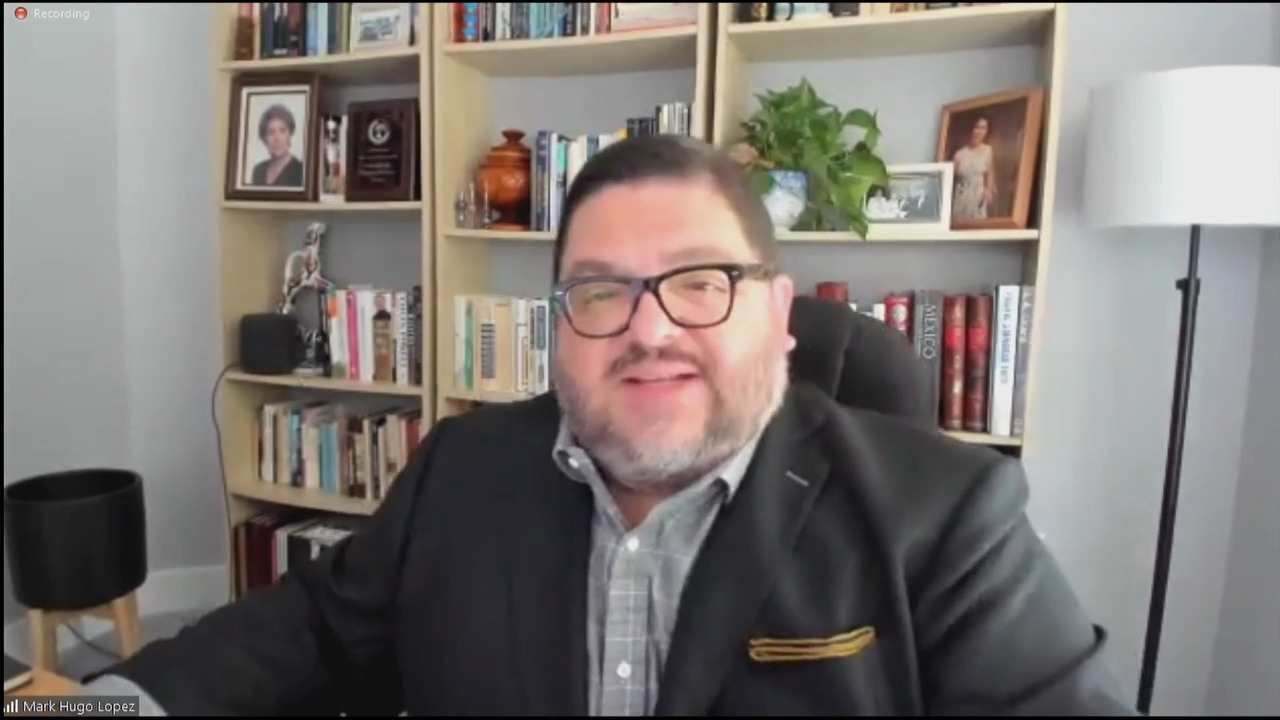 July 15. As the United States’ Latino population expands, so does debate on how to reach Latino voters. Both major U.S. parties are reassessing strategies after 2020 surprises and in recognition of the diversity and complexity of this growing demographic. Briefer: Mark Hugo Lopez, Director of Race and Ethnicity, Pew Research Center. Lopez is the co-editor of “Adjusting to a World in Motion: Trends in Global Migration and Migration Policy.” He is a co-author of “The Future of the First Amendment” and has contributed chapters to several books about voting and young Latinos. Lopez frequently appears in national and international media in both Spanish and English.

U.S. 2022 Midterm Elections: Role of the Economy in Elections

July 15. Economic sentiment plays a pivotal role in how Americans make their electoral choices and is one of many factors that could influence how voters cast their ballots in the 2022 midterm elections. As part of the FPC’s briefing series on understanding U.S. elections, two briefers from Rutgers University speak to the state of the U.S. economy and the influence it may have on American voters’ sentiments. Briefers: Dr. James Hughes, Dean Emeritus, School of Planning and Public Policy at Rutgers University, is a nationally recognized expert on economic, demographic, housing market, and real estate development issues. He is author or co-author of 35 books and monographs and more than 150 articles. Dr. Ross Baker is a Distinguished Professor of Political Science at Rutgers University and is the author of following books: “American Government,” “Friend and Foe in the U.S. Senate,” and “Is Bipartisanship Dead?”, among other publications. He was contributing editor to American Demographics, is currently a Member of the Board of Contributors of USA Today, and has extensive experience on Capitol Hill.

This briefing discusses recent research on the relationship between faith, religious beliefs, and politics, their influence on voting and political participation, and potential role in the 2022 midterms.  Briefer David Campbell is the Packey J. Dee Professor of American Democracy at the University of Notre Dame and the former chairperson of the political science department.  His research addresses civic and political engagement with a particular focus on religion and secularism, and young people.  His most recent book is Secular Surge: A New Fault Line in American Politics.  He is also the co-author of American Grace: How Religion Divides and Unites Us, and Why We Vote: How Schools and Communities Shape Our Civic Life.  He has published scholarly articles in a variety of journals. 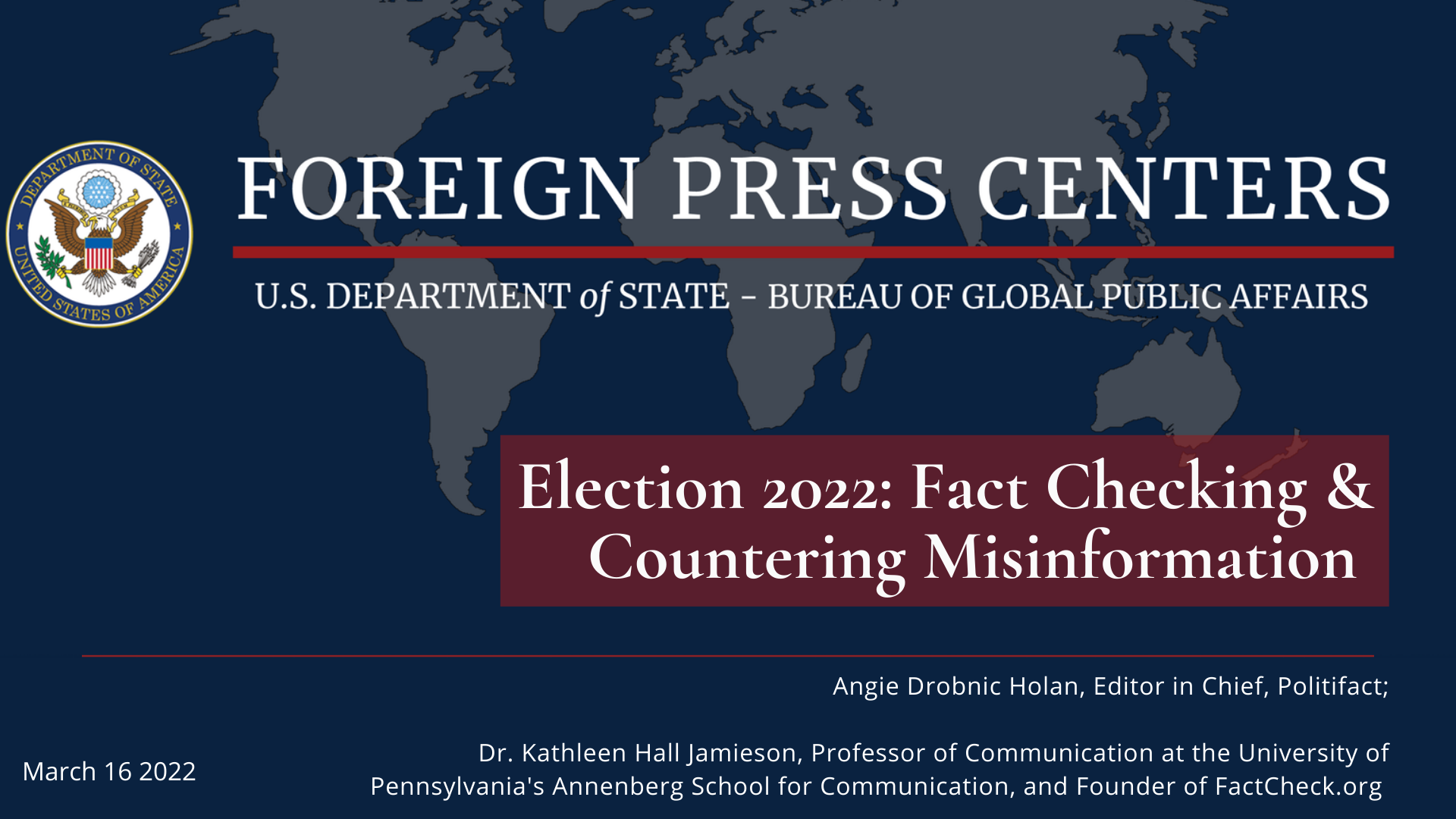 In this briefing, journalists heard from two leading U.S. experts dedicated to providing accurate and objective information about U.S. elections.  Dr. Kathleen Hall Jamieson, professor of communication at University of Pennsylvania and co-founder of FactCheck.org, a project of the Annenberg Public Policy Center and Angie Drobnic Holan, editor in chief of PolitiFact, a project of the Poynter Institute, discussed the role of fact checking in countering the misinformation that distorts political processes and hinders citizens’ ability to make sound voting decisions.  They also provided an overview of tools and fact-checking resources for journalists reporting on the midterms that are available through PolitiFact and FactCheck.org.

In this briefing, Mohamed Younis, Editor in Chief, Gallup, discusses the latest indicators, trends and issues that will put the 2022 U.S. midterm elections into context, including: new data from Gallup’s U.S. Economic Confidence Index, the latest polling on what Americans view as “the most important problem” facing the nation, presidential job approval, and Americans’ satisfaction with the direction of the country.

Understanding the American Voter in 2022

To kick off the Foreign Press Centers’ 2022 Midterm Elections Series, this briefing helps journalists understand the unique demographic factors and voting blocs in the American electorate today.  The briefing also explores key findings from Pew Research Center‘s recently released 2021 political typology report, which analyzes the diversity of views that exist within both Republican and Democratic partisan coalitions, and highlights the fact that many Americans do not fit easily into either one.  Briefer Bradley Jones, is a Senior Researcher for Pew Research Center where he primarily works on U.S. public opinion about politics.

Redistricting: An Academic and Legal Perspective 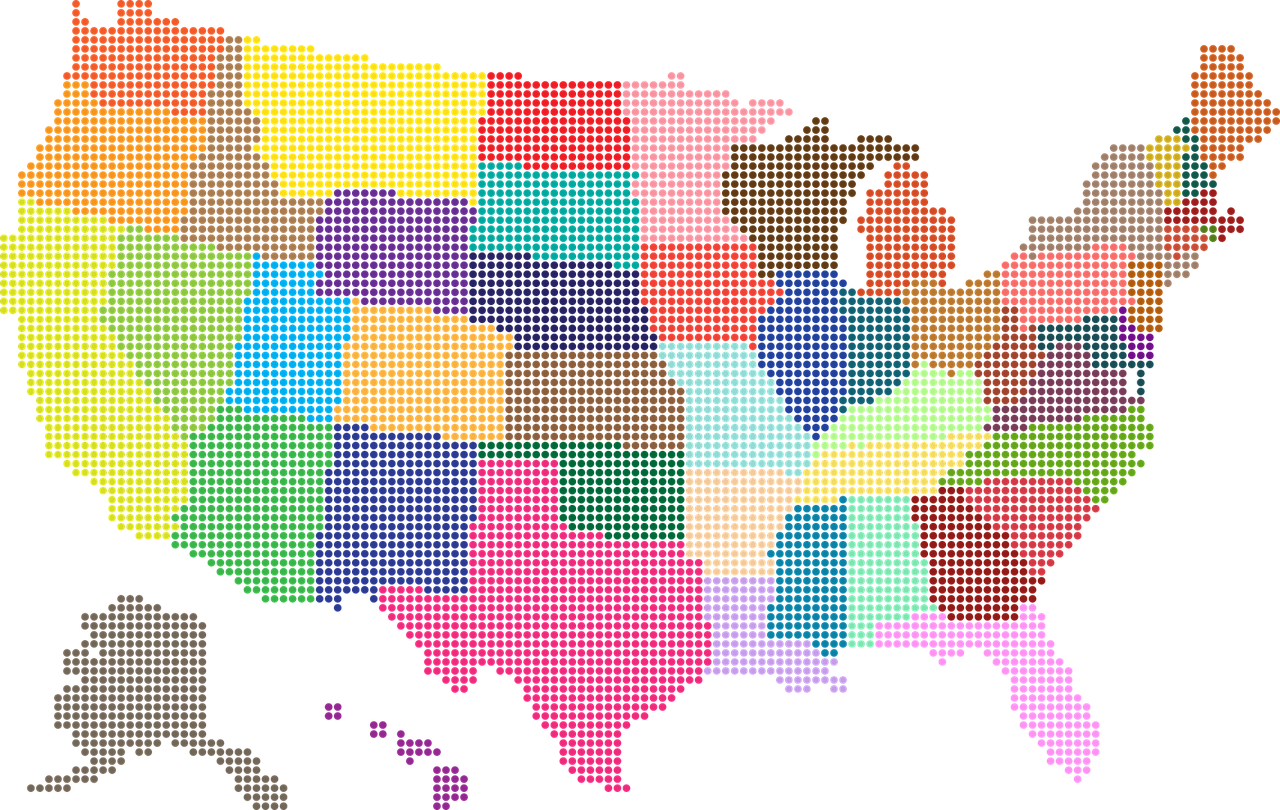 Redistricting, the process of drawing electoral district boundaries, takes place in the United States following the completion of each decennial census, to account for population shifts.  The rules for redistricting vary from state to state, but all states draw new legislative maps either in the state legislature, in redistricting commissions, or through some combination of the two.  Rebecca Green, Professor of Law at the College of William and Mary, and Co-Director of the Election Law program, is an expert on election law, legislative redistricting, and redistricting transparency.  She has served on the bipartisan National Task Force on Election Crises and provided research support for the Presidential Commission on Election Administration.  She explains the various approaches to redistricting at the state level from a legal perspective, and the current status of redistricting efforts.

Throughout U.S. history, civil rights leaders past and present have fought to ensure that the freedom to vote is a fundamental right for everyone.  Civil rights icons such as Ida B. Wells, Martin Luther King, Jr., and Fannie Lou Hamer were instrumental in laying the foundation for securing and maintaining the right to vote for African Americans, culminating in the passage of the Voting Rights Act of 1965.  However, the COVID-19 pandemic brought many changes to the voting process in 2020, and many new voting laws, raising new questions about the future of voting rights in the United States.  Dr. Keisha N. Blain, an award-winning historian and expert on the U.S. civil rights movement, provides a historical overview of icons of voting rights and the Voting Rights Act, while contextualizing their continuing relevance for contemporary voting rights issues today.  Her new book Until I Am Free: Fannie Lou Hamer’s Enduring Message to America, explores how Hamer’s ideas remain salient for a new generation of racial justice advocates.