The Road Ahead: the State Department Confronts the Opioid Crisis 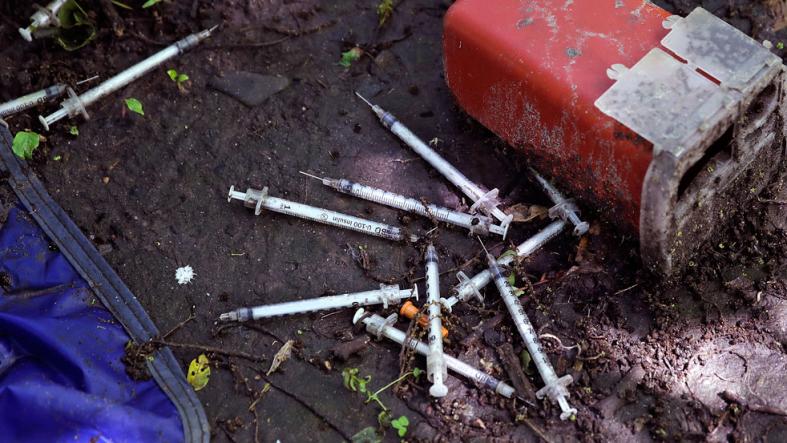 Discarded used hypodermic needles lie on the ground at an encampment where opioid addicts use drugs.

Our nation’s opioid epidemic has impacted far too many of us across the United States, and I intend to do my part in reversing this awful trend. I was shocked to hear so many tragic stories from family and friends that have been directly impacted by the opioid crisis during a visit back to my hometown in Mishawaka, Indiana this past summer. With over 64,000 overdose deaths in 2016, according to the Center for Disease Control (CDC), I imagine many of you reading this blog have similar stories.

The loss of so many Americans is truly sobering and I’m humbled to be in a position to do something about it and help strike a very real blow against this epidemic. The bureau that I currently lead, International Narcotics and Law Enforcement Affairs, or INL, is taking action around the world against the opioid crisis, an absolute top priority for the Administration. With heroin and synthetic opioids like fentanyl being produced and trafficked from abroad, an effective U.S. response must have an international component. That is where the State Department and my bureau play an essential role.

The President’s announcement last year declaring a public health crisis rightfully emphasizes U.S. drug prevention and treatment, but reducing the availability of these dangerous drugs must also be a part of our response. Together with our international partners, we achieved notable milestones in tackling the supply of heroin and dangerous synthetic opioids in 2017. However, with overdose deaths continuing to increase at an agonizingly high rate, I am well aware that much more still needs to be done. As I mobilize INL to support the President’s call “to be the generation that ends the opioid epidemic”, we will focus on these key efforts: 1) expanding upon our collaboration with Mexico to reduce the supply of heroin and other drugs into the U.S., 2) disrupting the flow of synthetic drugs and precursor chemicals coming out of China, 3) broadening global controls over synthetic drugs and precursor chemicals, and promoting a global response to the drug crisis, and 4) getting the latest law enforcement tools for responding to drug trafficking into the hands of our overseas partners, by working with our U.S. interagency partners and relevant multilateral organizations.

Under the leadership of Secretary Tillerson, Secretary Nielson, and Attorney General Sessions, we now have unprecedented levels of cooperation between Mexico and the U.S. to jointly tackle the criminal organizations that are largely responsible for most of the heroin being consumed by Americans. Through the Merida Initiative, the U.S. and Mexico made substantial progress in 2017. For example, we provided Mexican law enforcement canines that are trained to detect fentanyl. In just one case, 2,100 fentanyl pills hidden in coffee and shoes, as well as 12 vials of fentanyl, were discovered at the Tijuana airport. In the coming year, INL will continue to assist Mexico in developing its capacity to interdict drugs, improve border security against drug trafficking, reduce production of heroin and synthetic drugs, take down clandestine drug labs, and investigate financial crimes.

Collaboration with China, a source country for fentanyl, is essential. When President Trump visited China in November 2017, he and President Xi agreed to increase cooperation in combating drugs. This high-level engagement enhanced ongoing working-level cooperation with China — in which INL plays a key role — and has already paid dividends. On December 28, the Ministry of Public Security announced that China will control two important fentanyl precursors. China’s participation in an INL-supported December 2017 Global Lab Directors symposium also sparked new opportunities for cooperation, focused on better understanding the deadly toxic adulterants being added into illicit drugs. In 2018, we will continue to work with China to implement domestic class control of fentanyl and its known and future analogues. This will enable robust oversight of this dangerous family of synthetic opioids, thereby eliminating the legal “grey zone” in China where many of the illicit producers and traffickers currently operate.

In March 2017, assertive U.S. diplomacy led the United Nations Commission on Narcotic Drugs (CND) to unanimously vote to internationally control the two leading precursor chemicals used to make fentanyl. This vote makes it more difficult for criminals to produce and traffic fentanyl into our nation. When the CND convenes in 2018, we will push for additional controls on carfentanil, an elephant tranquilizer that is 100 times stronger than fentanyl, as well as other toxic fentanyl analogues.

Sadly, by the end of 2017 we saw a growing recognition that the opioid crisis isn’t just a burden to be borne by the United States, but that it is a truly global threat. We are seeing alarming overdose deaths in other nations. The same factors that have made this epidemic so ghastly and challenging to address make it a global threat, thereby requiring close cooperation with international allies and partners. I was happy to attend the annual International Society of Substance Use Prevention and Treatment Professionals (ISSUP) Workshop last December in Mexico. This INL-supported global initiative was a key opportunity to address the demand side of the opioid crisis. Representatives from over 65 countries met with the world’s top practitioners in drug treatment and prevention to analyze what has been proven to work. Exchanging best practices in substance use treatment and prevention will save lives and we will continue this work in 2018 at the upcoming ISSUP Workshop in Nairobi, Kenya. I also represented the United States at the U.S.-EU Drugs Dialogue in Brussels, where we reaffirmed our commitment to working together to address this increasingly global crisis, and we will continue this collaboration in 2018.

We cannot sit still. Illicit opioids continue to flow into our country, causing death and lasting pain in our communities. Our drug policies have adapted over the years to aggressively focus on the demand as well as the supply, and now is not the time to take our foot off the gas in terms of drug supply overseas: Colombia, with its now all-time record high coca cultivation, represents a stark example of what can happen. Moreover, the supply side today presents a wholly new challenge from that which faced our nation in the 1980s and 1990s — rogue chemists, the Dark Web, and small shipments using the mail are all elements of our new reality that we must face. The growing use of information technologies by crime groups means we must continue to build foreign law enforcement partner capacity — we need strong multilateral cooperation if we are to protect our citizens from borderless threats. Our ongoing efforts include building foreign partners’ capacity to counter increased use of the Dark Web, the Internet, and cryptocurrencies in trafficking illicit drugs.

As we continue to make combatting opioid abuse a priority throughout 2018, you have my commitment that this bureau will do everything we can to make it harder for international criminals to produce and distribute these dangerous drugs to our fellow Americans. I encourage you to follow our progress on Twitter and Facebook (both @StateINL), and welcome your support.

About the Author: James Walsh serves as Deputy Assistant Secretary for International Narcotics and Law Enforcement Affairs at the U.S. Department of State.

Editor’s Note: This entry also appears in the U.S. Department of State’s publication on Medium.com.