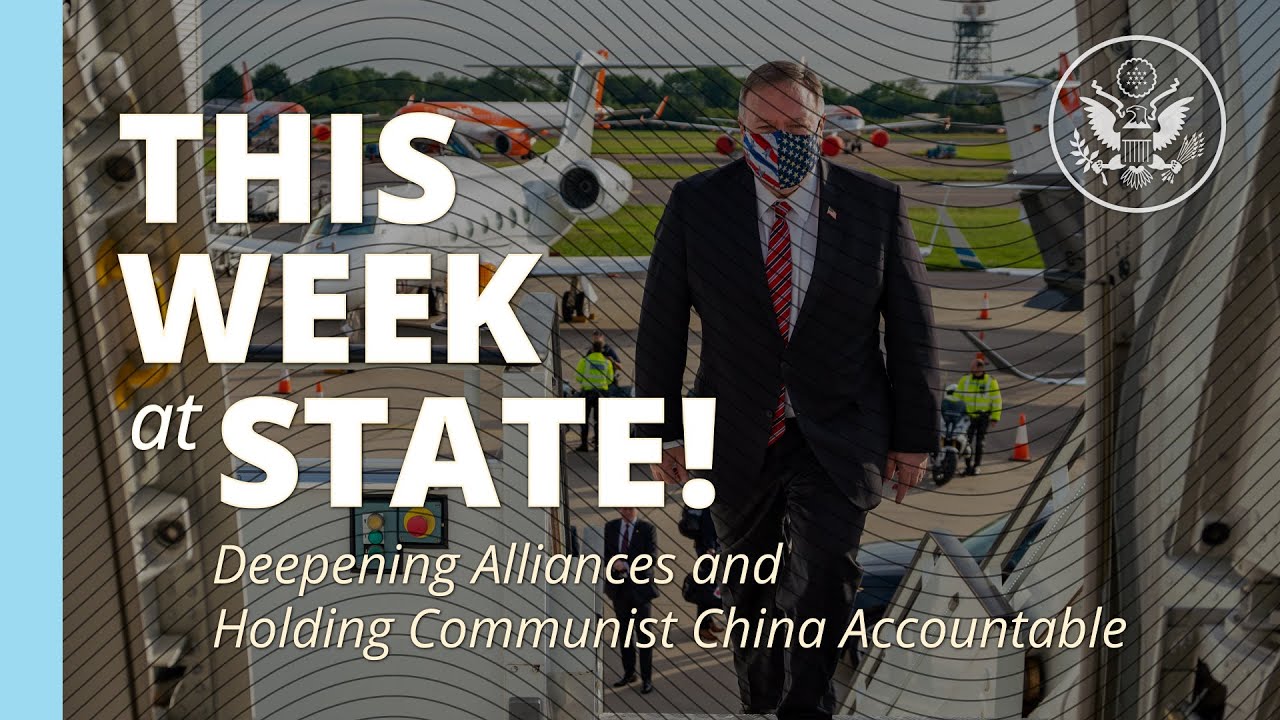 Department of State Named 2020 Public Sector Employer of the Year

The Department of State was recognized for its commitment to promoting diversity and inclusion in its workforce of over 76,000 employees by Careers and the DisABLED Magazine. The Department received the magazine’s 2020 Public Sector Employer of the Year Award as a result of its dedication to advancing workforce diversity, including through supporting employees with disabilities.

Secretary Pompeo Travels to the United Kingdom and Denmark

Successful trip to the U.K. and Denmark. It’s always great to meet with longstanding friends and to continue strengthening our partnerships. pic.twitter.com/Ts7uUDFk8d

The U.S. has no closer partner than the United Kingdom. The strong relationship between the two nations reflects our common democratic ideals and values, which are reinforced through cooperation on political, security, and economic issues. pic.twitter.com/pygy43Pjxt

On July 22, Secretary Pompeo travelled to Denmark. The United States and Denmark are steadfast allies and partners. The U.S. partnership with Denmark, Greenland, and the Faroe Islands is critical to protecting the arctic.

While in Denmark, Secretary Pompeo met with Danish Prime Minister Frederiksen and with the Foreign Ministers of Denmark, Greenland, and the Faroe Islands.

The U.S. and the Kingdom of Denmark are steadfast allies and partners. We are great friends who trust one another and share essential values, such as freedom of expression and freedom of religion. https://t.co/FYu9kIDpZU pic.twitter.com/71qi6fjygh

The 80th Anniversary of the Welles Declaration

In a July 22 statement, Secretary Pompeo marked the 80th Anniversary of the Welles Declaration. The Welles Declaration is a proud moment in the history of U.S. foreign policy and friendship with the peoples of Estonia, Latvia, and Lithuania. Eighty years ago, the United States pointedly refused to recognize the illegal incorporation of the Baltic states into the Soviet Union. The Soviet Union’s criminal act was accomplished through the signing of secret protocols to the Molotov-Ribbentrop Pact with Nazi Germany in August 1939.

In 1940, the Soviet Union forcibly and illegally annexed Estonia, Latvia, and Lithuania. Through five decades of Soviet occupation, the United States never ceased to recognize the Baltic states’ sovereignty and advocate for their freedom. #WellesDeclaration pic.twitter.com/Dd2tWFDMbv

The Department of State Breaks Ground on the New U.S. Embassy in Windhoek, Namibia

On July 23, in a display of enduring friendship and the important bilateral partnership, U.S. Ambassador to Windhoek Lisa A. Johnson, Deputy Foreign Minister, Honorable Jenelly Matundu, and Mayor of Windhoek, Her Worship Fransina Kahungu, broke ground today on the new U.S. Embassy campus in Windhoek, Namibia.

1/2 Today, Amb. Johnson, Hon. Deputy Min. of @MIRCO_NAMIBIA & Mayor of @CoWMunicipality, held a ground breaking ceremony for the new U.S. Embassy Campus in Klein Windhoek, an investment by the 🇺🇸 in our 30-year relationship with 🇳🇦. pic.twitter.com/c7uYfwvfYT

The new U.S. Embassy will provide a state-of-the-art, modern, and resilient platform for U.S. diplomacy in Namibia.  Skidmore, Owings, and Merrill of San Francisco, California is the design architect for the project and B.L. Harbert International of Birmingham, Alabama, is the construction contractor.  The project is expected to be completed in 2023.

In a July 22 statement, Secretary Pompeo announced the United States is sanctioning brothers Santiago Jose Moron Hernandez and Ricardo Jose Moron Hernandez for their sustained support of corruption by the illegitimate Maduro regime.  By enabling an illicit gold scheme and other blatant public corruption, these two men have turned a blind eye to the suffering of the people of Venezuela who are the victims of their corrupt enterprise.

On July 23, Secretary Pompeo delivered a speech on “Communist China and the Free World’s Future” at the Richard Nixon Presidential Library and Museum.

The only way to truly change Communist China is to act on the basis of what its leaders do, not what they say. President Reagan dealt with the Soviets on the basis of “trust but verify.” When it comes to the CCP, I say, “Distrust and verify.”

.@SecPompeo: Changing the Chinese Communist Party's behavior cannot be the mission of the Chinese people alone. Free nations have work to do to defend freedom. I have faith we can do it. I have faith because we've done it before. pic.twitter.com/RHNVeMCneg