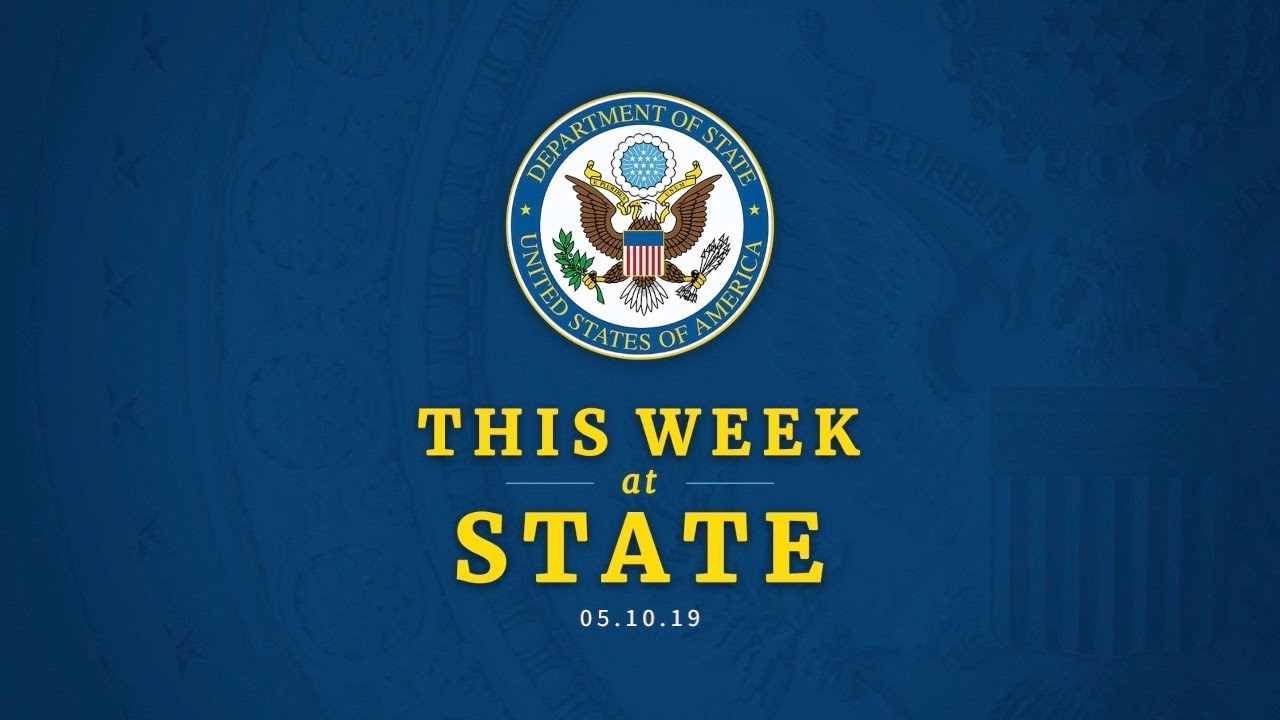 Did you miss key foreign policy developments this week? Each week, DipNote recaps the latest U.S. Department of State highlights spanning a wide range of global issues, events, and initiatives in one blog post.

Here are the key moments from This Week at State:

In a press statement on May 4, Department Spokesperson Morgan Ortagus strongly condemned the ongoing barrage of rocket attacks by Hamas and Palestinian Islamic Jihad from Gaza upon innocent civilians and their communities across Israel.

Statement by @statedeptspox on rocket attacks on Israel. pic.twitter.com/zDSvZMoh2o

On May 5, Secretary of State Michael R. Pompeo discussed North Korea, China, Russia, and the ongoing situation in Venezuela in interviews with with Margaret Brennan of CBS Face the Nation, Jonathan Karl of ABC’s This Week, and Chris Wallace of Fox News Sunday.

In a press statement on May 5, Spokesperson Ortagus expressed concern over Turkey’s announced intention to begin offshore drilling operations in an area claimed by the Republic of Cyprus as its Exclusive Economic Zone. The Spokesperson said, “This step is highly provocative and risks raising tensions in the region. We urge Turkish authorities to halt these operations and encourage all parties to act with restraint.”

On May 7, Secretary Pompeo delivered remarks at the 11th Ministerial Meeting of the Arctic Council in Rovaniemi, Finland. As an Arctic State, the United States joined seven other Arctic States at this biennial gathering to strengthen cooperation and ensure the region remains free of conflict.

The strong and stable partnership between Arctic nations ensures that the region is and remains peaceful. At @ArcticCouncil, we are proud to work closely with Canada, Denmark, Finland, Iceland, Norway, Russia, Sweden, and indigenous groups to govern the Arctic. pic.twitter.com/jvgson6xlK

Secretary Pompeo spoke again to the traveling press, on May 7, en route to London to discuss his impending meetings there. In London, Secretary Pompeo participated in a Religious Freedom Roundtable, gave remarks on the Special Relationship between the United States and the United Kingdom, participated in a press availability with British Foreign Secretary Jeremy Hunt, and spoke with Adam Boulton of Sky News.

My discussions with @theresa_may and @Jeremy_Hunt demonstrated that the U.S.-UK partnership is enduring and strong. We will continue to work together – from advancing regional security to promoting trade & investment – to improve the lives of people at home and across the globe. pic.twitter.com/8UOe0PPieZ

In a press statement on May 6, Spokesperson Ortagus expressed support for the UK’s continued sovereignty over the British Indian Ocean Territory (BIOT) and the April 30 statement by the U.K. Government.

The United States supports the UK’s continued sovereignty over the British Indian Ocean Territory and the April 30th statement by the UK Government. The U.S. views this issue as a purely bilateral dispute between the UK and Mauritius. https://t.co/Az1ym7tgxj

In a press statement on May 6, Spokesperson Ortagus conveyed that the United States recognizes the efforts of the North Korean defector and human rights community to continue to shine a spotlight on the dire human rights situation in North Korea.

As we reflect on #NorthKorea Freedom Week, we recognize the efforts of the North Korean defector and #humanrights community to continue to shine a spotlight on the dire human right situation in North Korea. https://t.co/jLUMaQlqQX pic.twitter.com/BS918FBOpM

U.S. Congratulates Laurentino Cortizo on Election as President of Panama

In a press statement on May 6, Spokesperson Ortagus commended the people of Panama for exercising their right to vote in free and fair national elections as a sure sign of their thriving democracy. The Spokesperson also extended the United States’ warmest congratulations to Laurentino Cortizo on his election as the next president of the Republic of Panama.

On May 6, the State Department’s Greening Diplomacy Initiative (GDI) recognizedEmbassy Canberra for their innovative leadership within the agency on sustainability, energy, and environmental diplomacy.

On May 7-8, the State Department hosted the first annual U.S.-Kenya Bilateral Strategic Dialogue, established by President Trump and President Uhuru M. Kenyatta at the White House on August 27, 2018. The two countries committed to deepen economic ties, maximize Kenya’s use of trade benefits under the African Growth and Opportunity Act, and explore a future bilateral trade and investment framework.

In a press statement on May 7, Spokesperson Ortagus congratulated President-elect Stevo Pendarovski on his victory in North Macedonia’s presidential elections, and commended the citizens of North Macedonia who exercised their right to vote.

The United States congratulates President-elect Stevo Pendarovski on his victory and commends the citizens of North Macedonia who exercised their right to vote in peaceful and competitive presidential elections. https://t.co/8YDcS6lzlO pic.twitter.com/LPRsCvEvtu

In a press statement on May 8, Secretary Pompeo noted that one year ago, President Trump announced the United States would cease to participate in the Joint Comprehensive Plan of Action and would instead embark on a bold new strategy to end Iran’s destabilizing behavior and prevent Iran from ever acquiring a nuclear weapon. One year later, President Trump has made good on his promise to counter Iran in a comprehensive campaign of maximum pressure.

Today marks one year since President @realDonaldTrump made the historic decision to leave the Iran nuclear deal and embark on a bold new strategy to counter #Iran. Our maximum pressure campaign has already achieved historic success.

On May 8, Special Representative Hook discussed this anniversary in remarks at the Center for Strategic and International Studies.  The Special Representative said, “By nearly every measure, the regime is weaker today than when we took office two years ago. Its proxies are underfunded and demoralized. Unless the regime demonstrates a change in behavior, the pressure on Tehran will mount.”

Proud to report to Congress that we have achieved the goals of the #Jerusalem Embassy Act by opening not just @usembassyjlm offices in Jerusalem, but also an Ambassador’s residence in Jerusalem. No more waivers. Another great step for the U.S.-#Israel partnership!

On May 8, the State Department announced that it will host the Ethiopia Partnerships Forum (EPF), a U.S.-Ethiopia economic engagement platform to raise awareness of Ethiopia’s bold new efforts to transform its economy and create attractive business opportunities, on May 15-16, 2019.

U.S. Comments on the Cancellation of Istanbul Mayoral Election Results

In a press statement on May 8, Spokesperson Ortagus noted that free and fair elections and acceptance of legitimate election results are essential for any democracy, and urged Turkish authorities to carry out the Istanbul Mayoral Election in keeping with its laws and in a manner that is consistent with its OSCE commitments.

We take note of the Turkish Supreme Election Council extraordinary decision to re-run the Istanbul mayoral election. We urge Turkish authorities to carry out this election in keeping with its laws and its long, proud democratic tradition. https://t.co/9SLGNoe3Io pic.twitter.com/LQDn7jeO7L

U.S. Welcomes News of Asia Bibi’s Reunification with Her Family

On May 8, the United States welcomed the news that Asia Bibi has safely reunited with her family. This important step followed the decision of Pakistan’s Supreme Court to acquit her of blasphemy charges in October 2018– a decision that was subsequently upheld in January 2019. The United States uniformly opposes blasphemy laws anywhere in the world, as they jeopardize the exercise of fundamental freedoms.

.@SecPompeo: The United States welcomes the news that Asia Bibi has safely reunited with her family. The U.S. uniformly opposes blasphemy laws anywhere in the world, as they jeopardize the exercise of fundamental freedoms. https://t.co/QQ5SQdI0cI

On May 9, Secretary Pompeo spoke by phone with Brazilian Foreign Minister Ernesto Araujo and met with Japanese Chief Cabinet Secretary Suga at the State Department in Washington, DC.

In a statement on the occasion of the 71st anniversary of Israel’s independence, on May 9, Secretary Pompeo said, “ I am filled with great pride in all that the United States and Israel have accomplished together over the course of the last 71 years, and particularly over the last year. We have worked closely together to counter Iranian aggression, enhance Israel’s relationships in the region, and foster even closer ties between our peoples. I am proud to affirm our continued support for Israel.”

In a statement on May 9, Secretary Pompeo addressed Iran’s escalating series of threatening actions and statements in recent weeks. He stated, “The regime in Tehran should understand that any attacks by them or their proxies of any identity against U.S. interests or citizens will be answered with a swift and decisive U.S. response. Our restraint to this point should not be mistaken by Iran for a lack of resolve. To date the regime’s default option has been violence, and we appeal to those in Tehran who see a path to a prosperous future through de-escalation to modify the regime’s behavior.”

The Islamic Republic of Iran has engaged in an escalating series of threatening actions and statements in recent weeks. Any attacks by them or their proxies against U.S. citizens or our interests will be answered with a swift and decisive response.

Secretary Pompeo Comments on the Detainment of Edgar Zambrano in Venezuela

In a statement on May 9, Secretary Pompeo said, “The arbitrary arrest yesterday evening of Edgar Zambrano, First Vice President of Venezuela’s National Assembly, is an unacceptable and illegal act that is yet another reflection of the repression of the former Maduro regime. This is an attack on the independence of the nation’s democratically elected legislative branch and is part of the Maduro regime’s continued attempts to crush dissent and free debate in Venezuela.”

The detention of @EdgarZambranoAD is yet another desperate act of a tyrannical regime. The Venezuelan people demand justice. #Venezuela, like all of Maduro’s political prisoners, deserves to be free. #EstamosUnidosVE https://t.co/0HilWYnCRo

Secretary Pompeo Condemns the Attack on U.S. NGO in Kabul

In a statement on May 9, Secretary Pompeo strongly condemned the Taliban attack against Counterpart International, a U.S. nonprofit organization and USAID implementing partner in Kabul.

The U.S. strongly condemns the Taliban attack against @counterpartint, a U.S. nonprofit organization and @USAID implementing partner in Kabul. This violent attack is a senseless assault on the noble values of service to others, education, and inclusion. https://t.co/rcycHhLNCn

On May 10, the State Department announced Secretary Pompeo will travel to Moscow and Sochi, Russia from May 12-14. On May 13, he will arrive in Russia to meet with his team at U.S. Embassy Moscow before meeting with U.S. business leaders and U.S. exchange alumni. Secretary Pompeo will lay a wreath at the Tomb of the Unknown Soldier. Secretary Pompeo will travel to Sochi, Russia on May 14 to meet with Russian Foreign Minister Sergey Lavrov and President Vladimir Putin to discuss the full range of bilateral and multilateral challenges. For more details about the Secretary’s trip read this transcript of a briefing previewing the itinerary.

Editor’s Note: This entry is also published in the U.S. Department of State’s publication on Medium.