A lock ( ) or https:// means you’ve safely connected to the .gov website. Share sensitive information only on official, secure websites.
DipNote: All Posts 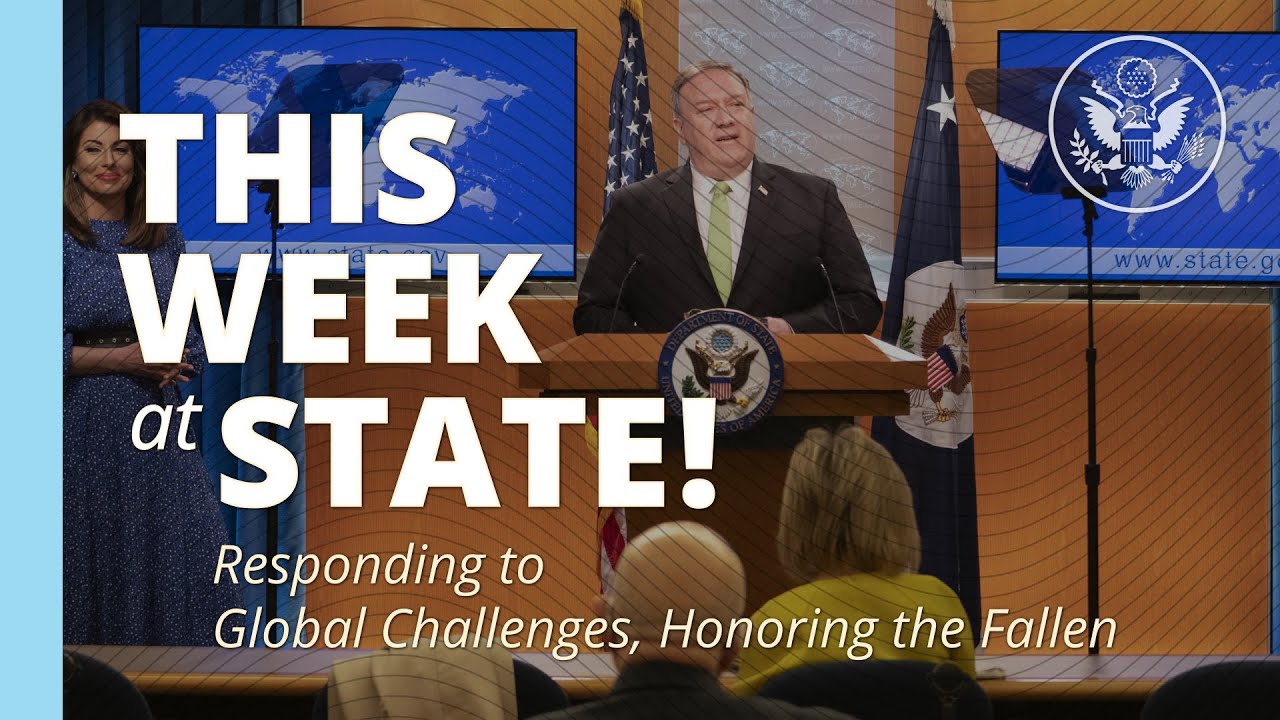 Here are the highlights from This Week at State :

The United States Applauds the Arrest of Félicien Kabuga

In a May 18 statement, Spokesperson Ortagus applauded the Government of France and the International Residual Mechanism for Criminal Tribunals for the arrest of Félicien Kabuga, who is charged with playing a key role in the 1994 genocide in Rwanda. The United States commends law enforcement officials worldwide who contributed to the arrest. This is a milestone for international justice, and a message to all fugitives indicted for genocide that they will be brought to justice.

In a May 18 statement, Secretary Pompeo and the United States condemned Taiwan’s exclusion from the World Health Assembly. At a time when the world continues to struggle with the COVID-19 pandemic, we need multilateral institutions to deliver on their stated missions and to serve the interests of all member states, not to play politics while lives are at stake.

.@StateDeptPM Assistant Secretary Cooper: When times are tough, one can rely on a friend like the USA. This means that our allies and partners need defense articles, training and security assistance more than ever. America remains their global security partner of choice. #COVID19 pic.twitter.com/mLhpnT52Dw

The National Museum of American Diplomacy is proud to launch the virtual exhibit Bringing #AmericansHome: Diplomats on the Front Line of COVID-19. This new and evolving exhibit captures the historic and ongoing efforts of the U.S. Department of State to repatriate more than 90,000 American citizens and legal residents during the pandemic. Through stories, photos, and videos, the exhibit examines the personal impact of American officials serving on the front lines of the global COVID-19 pandemic as international first responders. This unprecedented effort is grounded in over 200 years of protecting American citizens abroad and bringing them home during times of crisis. Bringing #AmericansHome highlights and honors those efforts. Secretary of State Michael R. Pompeo initiated the social media hashtag #AmericansHome to signal his support for the heroic behind-the-scenes efforts of Americans diplomats in the field.

The Department is excited to share the launch of @NMADmuseum’s online exhibit highlighting the courageous work our colleagues are doing across the world to bring #AmericansHome. To see what the Department is doing at the front line of COVID-19, visit: https://t.co/GSb5hmTLVK

The Department of State has made the promotion and protection of religious freedom a priority, especially in China, where people of all faiths face severe repression and discrimination. As part of that mission, on May 17, we marked the 25th anniversary of the disappearance of the 11th Panchen Lama, Gedhun Choekyi Nyima, who has not appeared in public since the PRC government abducted him in 1995, at age six.

Standing with the Iranian People

On May 20, the United States imposed financial sanctions and visa restrictions on Iranian individuals and entities under human rights-related authorities. These actions with respect to 12 Iranian individuals and entities by the Department of State and Department of the Treasury send a message of support to the Iranian people that we will continue to support their demands for transparent and accountable governance and speak out for those who are being silenced by this regime. Our pressure on Iran to treat its own people with dignity and respect will not cease.

Two years ago today, @SecPompeo said the U.S. would advocate tirelessly for the Iranian people. The Department has done that. We commend the Iranian people and support their voices against a corrupt and oppressive regime. https://t.co/SyCZnOrO3I

On the Treaty on Open Skies

In a May 22 statement, The United States condemns the People’s Republic of China (PRC) National People’s Congress proposal to unilaterally and arbitrarily impose national security legislation on Hong Kong.  The decision to bypass Hong Kong’s well-established legislative processes and ignore the will of the people of Hong Kong would be a death knell for the high degree of autonomy Beijing promised for Hong Kong under the Sino-British Joint Declaration, a UN-filed agreement.

The United States condemns the PRC proposal to impose national security legislation on Hong Kong and strongly urges Beijing to reconsider. We stand with the people of Hong Kong.

In a May 22 statement, the United States announced new financial sanctions against Julio Cesar Aviles Castillo (Aviles) and Ivan Adolfo Acosta  Montalvan  (Acosta).  This new action furthers United States policy to hold accountable those individuals and entities who are key enablers of Ortega’s misrule and who perpetrate serious human rights abuse and seek to silence pro-democracy voices in Nicaragua.

On May 17, Secretary Pompeo conducted a call with Afghan President Ashraf Ghani and Dr. Abdullah Abdullah.

On May 20, Secretary Pompeo conducted a call with Spanish Foreign Minister González Laya.

On May 21, Secretary Pompeo conducted a call with Italian Foreign Minister Di Maio.

Each week, we recap the latest from the U.S. Department of State and cover a wide range of global issues, events, and initiatives. To learn more, go to www.state.gov and follow @SecPompeo , @StateDeptSPOX , @StateDept  and Facebook .