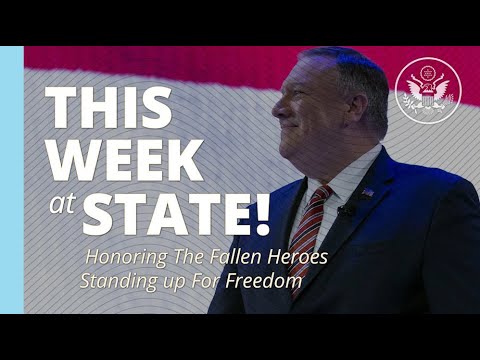 On May 23, the Secretary and the Department wished all Muslims around the world, Eid Mubarak. Over the past month, Muslims at home and abroad have fasted, centered around spiritual reflection, community and values of gratitude, compassion, and generosity, and have adapted to practicing their faith and observing Ramadan in a world changed by a global pandemic.

Eid Mubarak! From us at the Department to all the Muslim communities around the world. We wish everyone a peaceful and healthy Eid al-Fitr. pic.twitter.com/EaAbEw026W

Announced in a May 27 statement, the Secretary informed Congress that Hong Kong is no longer autonomous from China.

Today, I reported to Congress that Hong Kong is no longer autonomous from China, given facts on the ground. The United States stands with the people of Hong Kong.

Last week, the People’s Republic of China (P.R.C.) National People’s Congress announced its intention to unilaterally and arbitrarily impose national security legislation on Hong Kong. Beijing’s disastrous decision is only the latest in a series of actions that fundamentally undermine Hong Kong’s autonomy and freedoms and China’s own promises to the Hong Kong people under the Sino-British Joint Declaration, a UN-filed international treaty.

“Our approach is to mitigate the impact globally on the Hong Kong people while at the same time helping Beijing understand our concerns.”

On May 28, the Governments of the United States of America, Australia, Canada, and the United Kingdom released a joint statement on Hong Kong. The governments stated that Hong Kong has flourished as a bastion of freedom. The international community has a significant and long-standing stake in Hong Kong’s prosperity and stability. Direct imposition of national security legislation on Hong Kong by the Beijing authorities, rather than through Hong Kong’s own institutions as provided for under Article 23 of the Basic Law, would curtail the Hong Kong people’s liberties, and in doing so, dramatically erode Hong Kong’s autonomy and the system that made it so prosperous.

In a May 27 statement, Secretary Pompeo announced the end of the sanctions waiver covering all remaining JCPOA-originating nuclear projects in Iran – the Arak reactor conversion, the provision of enriched uranium for the Tehran Research Reactor, and the export of Iran’s spent and scrap research reactor fuel. The sanctions waiver covering these activities will end following a final, 60-day wind-down period allowing companies and entities involved in these activities to cease their operations. He also announced the designation of Majid Agha’i and Amjad Sazgar pursuant to E.O. 13382 for engaging or attempting to engage in activities that have materially contributed to, or pose a risk of materially contributing to, the proliferation of weapons of mass destruction.

Today, I am ending the sanctions waiver for JCPOA-related projects in Iran, effective in 60 days. Iran’s continued nuclear escalation makes clear this cooperation must end. Further attempts at nuclear extortion will only bring greater pressure on the regime.

On May 26, Secretary Pompeo conducted a call with Peruvian Foreign Minister Meza-Cuadra.

On May 28, Secretary Pompeo conducted a call with Jordanian Minister of Foreign Affairs Safadi.